The Introvert in Me Honors the Shut Up in You

Life used to be pretty sweet. I could go about my business happily enjoying alone time, Star Trek, and computer games while the people who loved me just said, “Oh, she’s not very social” and sent me nice notes about events I was invited to, but not expected to attend.  Then it happened.  Author Susan Cain’s groundbreaking book Quiet: The Power of Introverts in a World That Can’t Stop Talking was released. And the world didn’t stop talking.

Suddenly everyone was an introvert or knew an introvert and was compelled to talk to me about how they respected my need for solitude (often interrupting me while I was working, just to show me they understood I didn’t like to be disturbed).  My normally placid Facebook page was flooded with cutesy comics of “10 Ways to Love an Introvert,” along with notes saying “This is just like you!” And then, like that horror-filled scene in Jurassic Park where they look at the broken fences and realize velociraptors are freely roaming the island, playing chess and plotting to eat the children, a new animal emerged: the “extroverted introvert.”

Extroverted introverts are those wonderful folks full of energy, light, loud voices (and the willingness to use them) who think they might be introverted because they would rather “Netflix and chill (really just chill)” than join a flash mob singing “Thriller” at a Burger King.  They are so sure of their introversion they will talk to you in never-ending sentences about how much stress they feel out of their bubble, and that while they have the need to be constantly seen and surrounded by people, they are really very quiet in spirit. Just not in practice.

Personally, I think those of us who are actual introverts should sue Susan Cain for unwarranted exposure, defamation of quiet time, and disabling our pursuit of happiness. But, that would involve talking to lawyers, leaving the house, possible press coverage, and sitting in a room with people we don’t know. So, Susan Cain, please just go stand in a corner and think about what you did.

The Power of Shut Up

The problem isn’t that people aren’t as introverted as they want to be. It’s that most people can’t stand to be quiet when they are in a room (real or virtual) with another person. Learning to resist the urge for “pleasant conversation” or its horrible hillbilly cousin, “uncomfortable opinion spouting,” takes time and discipline. This is the information age where we reward talkers, typers, and those social “lean in” kind of people. How do those of us embedded in a system of constant communication learn to stop the chatter? By taking a spiritual adventure through the power of “shut up.”

Language is all around us. We don’t have to go to a party full of alcohol enhanced strangers to be talked up.  We don’t even have to leave the safe confines of our recliner. All we have to do was turn on a laptop, iPad or smartphone and…so much talking. Some of it from us.

In an era filled with free-falling verbiage, most of it untrue and damaging, my life became an epic journey in the jungle of other people’s communication. I devoured comment section weevils who eat the truth with alternative facts. I slayed fake news dragons, won reply wars, and laid down my weapons at the feet of “agree to disagree.” In short, like so many of us typing the good fight, I was exhausted.

I realized I needed to stop. I was going to hurt myself – or someone else – if I kept responding to all the people shouting around me.  I put down the phone, turned off the computer, and sat back to take a deep cleansing breath. I opened my eyes to discover the spell of silence. It was far more powerful than anything Harry Potter could conjure, and it filled me like cool spring water from the river of life. I wrapped my mind around the simple truth hidden in plain sight.

Personal peace doesn’t happen when other people stop talking. It happens when you do.

At first I was afraid. What would I do if I wasn’t communicating? Wouldn’t I cease to exist if I didn’t immediately add my voice to the fray? In our hectic 24-hour news cycle, if I listened to others and waited to form an intelligent, considered opinion – the topic would be over by the time I was ready to speak. What a loss! Still, I decided to give it a try. Stepping back to look and listen, I discovered there are some wonderful reasons to be iQuiet:

It lets you feel. Listening to what others have to say without thinking of what you want to say in response is one of the bravest, most revolutionary, things you can do. If you aren’t measuring their thoughts on the scale of right/wrong or looking for the weak link to break their logic, you will experience actual feelings about what they are telling you. The topic may make you sad or sentimental. The way they say it may bring up anger or happiness. There’s so much emotion going on in the silence. Feel it.

It makes you think. Most highly communicative folks like to believe they think a lot. The truth is – thinking isn’t the act of pondering something in your head while constantly re-confirming your own opinion. Thinking is taking in new data and adding or subtracting it from your mindset, leaving room for change and discovery along the way.Listening to someone else’s experience or ideas gives you building blocks for the castles of thought you want to live in.

I know, I know…that’s so much effort. Your new ability to understand, re-imagine, create and infuse your life with the world around you will give you wondrous insight.

It connects you. Buddhists believe that we have all the wisdom and knowledge of the world already inside of us. Thus when we encounter or hear something externally, the inner knowledge connects with its outer counterpart. That’s how we have those “ah-ha!” moments where we hear something new but we know instantly it is the truth – or at least – our truth.

I know, I know…other people, ew.  Yet, that is the basis of Namaste – the divine in me honors the divine in you. We are connected.

I can’t say I spend loads of time in the practice of “shut up.” But my rest here – listening to others, reading news from international perspectives, checking in with my own heart – before joining the commenting world – has been of benefit. Maybe, if I’m lucky, some of you will join me. Before we call out, speak truth, dialogue justice, and cry havoc – we can all sit down and shut up, together. 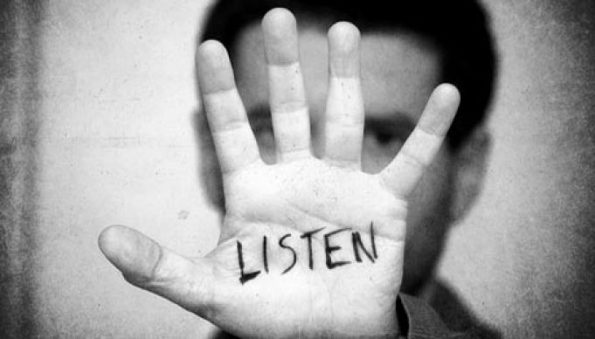