I’ve never visited any of the places Anthony Bourdain recommended. I never owned a Kate Spade purse. My palate is limited and my sense of style is best described as Mid-Life Lesbian at a Baseball Game.  Still, I lived in a world where Mr. Bourdain, by osmosis, gave everyone a sense of culinary pleasure and adventure. I lived in a world that popped with color and style as emerging female executives carried a sense of accomplishment and fun on a strap as they walked down the sidewalk. Anthony Bourdain and Kate Spade had no personal influence on my life, and yet, I feel like I’ve lost so much in such a short time.  Suicide – it does that.   It’s not just about them; it’s about us, too.

When anyone, particularly a famous person, takes his or her life, it doesn’t immediately bring out the “better angels of our nature” – in fact – we tend to knock those poor angels to the ground and trample them in a rush for information.

How did they do it?

Was there a note?

Was it her marriage?

Was he on drugs again?

Did they see a therapist?

Where was the family?

Who did they leave behind?

What were the signs?

How did we miss the signs?

It’s not the suddenness of the loss that makes us so immediately ghoulish. It’s the fear – that unspeakable chill that jumps out from the lock box in the corner of our mind and makes us believe it could be us, or someone we love, next.  The feeling of cosmic helplessness when someone goes to work one day and takes their life the next is pervasive. We paw our way through the haystack of news reports grasping at straws for our comfort – hoping to discover depression, discord, confusion, things we don’t have in our world, so we can find the elusive needle that says, “It won’t be you” or “It won’t be your daughter.” It’s illusion, you know, that assurance. We seek it all the same.

A better way is to stop rummaging around for signs of protection, and actually let ourselves simply feel our loss, our world’s loss, and remember that loss can come to us, too.  Instead of running from the specter of death, it would serve us to kneel before it and cry, admitting how very much it hurts when someone, anyone, says goodbye.  Instead of the self-serving language of “going on” – it would benefit all of us if we just admitted such a death knocks us beyond reason.

In a world where it’s hard enough to deal with the demons we see every day, we are outmatched by the invisible, insidious, and internal forces that show us only shadow, often too late. If we spent less time ruminating on the “causes of their pain” and more time admitting to ourselves and out loud – our loss, our sorrow, and our fear, it would not make us weaker. We would be pulling ourselves together by the collective thread that is our humanity.

How do we process this? With up-to-the-moment, absolute honesty. The mantra I’ve used for a while now is one designed to bring me back to ground level from the illusion of constant optimism and or the vulnerability of admitted pain. It centers me on the most important moment – this moment – and the most important understanding – the reality in this moment.  The mantra has been so powerful that I had a bracelet custom made to remind myself frequently where I am and where my mind should be also. 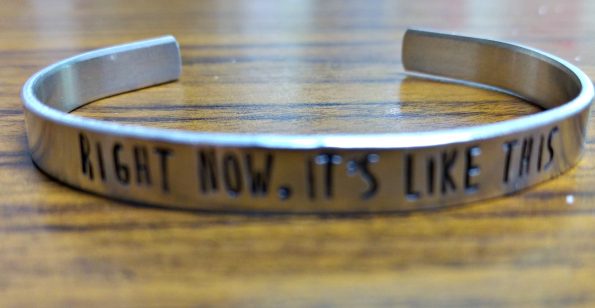 For Anthony Bourdain and Kate Spade, they hit the “right now” moment all of us fear most, and they dealt with their pain using the only option they felt they had left. I don’t know why. It doesn’t matter why. I hurt for their hurt. I hurt for their choice. I hurt.  I can admit that, because I know I will not hurt forever. And I will ultimately remember their larger-than-life spirit and outrageous talent. I will play with my dogs, hug my wife, and write some words. All will be well. Still, I’ve been sad most of the day. Right now, it’s like this.